How The 1871 Chicago Fire and
D. L. Moody
Relate to the
Heresy of Decisional Regeneration 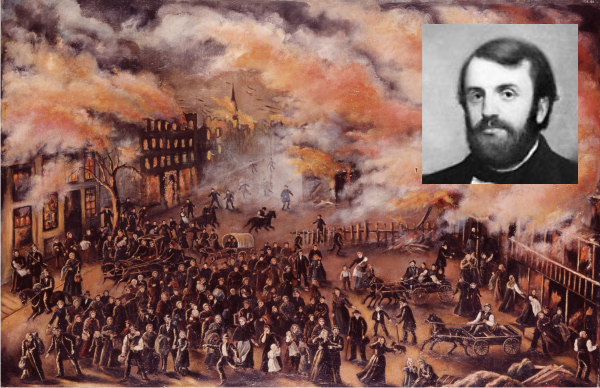 Because of the presumption of the modern altar call, the fact that D. L. Moody told his congregation to go home and consider their relationship to Christ instead of having seekers go into the Inquiry Room for counseling has been raised as a significant turning point for Moody's altar call approach.

Moody's text that evening was, “What shall I do then with Jesus which is called Christ?” (taken from Matthew chapter 27 verse 22.), and at the conclusion of his sermon he said, “I wish you would take this text home with you and turn it over in your minds during the week, and next Sabbath we will come to Calvary and the Cross, and we will decide what to do with Jesus of Nazareth.”

According to William Moody, his father told a Chicago audience on the twentieth anniversary of the fire, "What a mistake! I have never dared to give an audience a week to think of their salvation since...I would rather have that right hand cut off than to give an audience now a week to decide what to do with Jesus. I have often been criticized; people have said: "Moody, you seem to be trying to get people to decide all at once: why do you not give them time to consider?"... You will notice that Pilate was just in the condition of my audience that night, just the condition that you are in today - he had to decide then and there what to do with Jesus. The thing was sprung upon him suddenly, although I do not think that Jesus Christ could have been a stranger to Pilate...he must have heard of the sermons He had preached; he must have heard of the doctrine He taught; he must have heard of the wonderful parables that He uttered; he must have heard of the wonderful miracles that He performed...Pilate was no stranger to Jesus of Nazareth".

Here are a few points that relate to the modern view of decisional regeneration:

1) D. L. Moody never told anyone they were saved. He knew that salvation was in God's hands alone. His guilt was because he never had an opportunity to counsel those specific people again. Since the Chicago Fire, he always tried to ask people who were not saved to go the Inquiry Room for counseling so he would have the opportunity to help seekers understand New Testament salvation. All through the nineteenth century, less than 10% of seekers who went to the Inquiry Room left with the assurance they were born again.
2) D. L. Moody never had seekers do anything like repeat a salvation prayer. The counseling in the Inquiry Room was to help seekers understand what it meant to repent and submit to God, and diagnose and direct the unchurched and church members alike.
3) D. L. Moody would be shocked if he were to see how the typical altar call is handled today - he would condemn any minister that assured people they were saved because they did something, anything, let alone the repeating a salvation prayer.
4) Although it was D L. Moody that was most responsible for the gradual shift in the inquiry Room from the BEST system to the BIST system, he never, ever, told someone they were saved. He did give J. Wilbur Chapman the idea that the BIST system was useful for church people unsure of their salvation (to read about this, click here), but it was Chapman that taught Billy Sunday to use the BIST system with unchurched people who had no understanding of the gospel (to read about this, click here).
5) D. L. Moody did not give seekers the idea that "now is the day of salvation" meant "if you do this thing, God will save you now" (to read about this, click here).