How Nathan Lewis Rice
Relates to the
Heresy of Decisional Regeneration 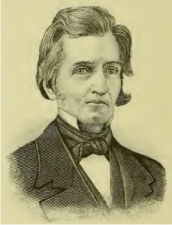 Nathan Lewis Rice (1807-1877) was a Presbyterian minister who trained at Princeton Theological Seminary. He is most famous for his debate with Alexander Campbell on the subject of baptism. The debate was held in Lexington, Ky. The moderators consisted of some of the most eminent lawyers of the state, among, whom was Henry Clay. This discussion created a wide and intense interest throughout the country, and brought out the full power of Dr. Rice as a disputant, and gained for him the reputation of being the greatest polemic of the age. The debate was written out by the disputants and published in a large octavo volume, which was extensively circulated.

In 1830, Alexander Campbell's Consistently Published view (and the majority opinion of Restorationists), was The Verbal-Restrictive theory, that is,
The work of the Holy Spirit is imminent (restricted to, but fully available) in the word of Scripture. The means of salvation are therefore restricted to hearing and reading scripture. Campbell wrote, “Whatever the word does, the Spirit does; and whatsoever the Spirit does in the work of converting men, the word does.”

But when confronted with this quote from The Christian System in a debate in 1843 with Nathan Lewis Rice, Campbell said he was NOT a strict “Verbal-Restrictivist”, and that he believed in some way the Spirit quickened scripture in the heart, which should have silenced Rice, because that sounds like the Scottish Common Sense Realism taught at Princeton Theological Seminary. Rice would have called it the "truth-impression" theory. Campbell's church called it the Verbal-Augmentative theory.

A good explanation of the "truth Impression" theory of Scottish Common Sense Realism was given By Archibald Alexander in commenting on the teaching of his mentor, William Graham. Notice the red comment.

"One of his radical principles was that the rational soul of man can undergo no moral change, except through the influence of motives, or the presentation through the understanding of such objects as excite the affections. He therefore scouted (refused to believe in) the opinion that in regeneration
there is any physical operation on the soul itself, and held that by the influence of the Holy Spirit truth is presented in its true nature to the rational mind, and when thus perceived cannot but (this is the “must” of Scottish Common Sense realism that was the beginning of the heresy of decisional regeneration which required no immediate change of character) produce an effect correspondent with its nature."

"He therefore fully held what has been called in some places the 'light-scheme' believing that all moral changes must be produced by new views, and can be produced in no other way. But how the dead soul could have truth thus presented to it, without being first vivified, he did not explain. In effect, however, he held with those who believe that all moral acts and exercises are produced by the operation of the truth, justly apprehended, but that in order to this a regenerating influence must be sent forth to render the soul capable of such views of truth as will produce these effects."

"Regenerating influence" is a sop to the Holy Spirit being necessary as a metaphysical "energizing" influence on the mind, so there can be a "truth impression" on the mind, as later explained by Archibald Alexander:

"There are two kinds of religious knowledge, which though intimately connected as cause and effect, may nevertheless be distinguished. These are the knowledge of the truth as it is revealed in the Holy Scriptures, and the impression which that truth makes on the human mind when rightly apprehended. The first may be compared to the inscription or image on a seal; the other to the impression made by the seal on the wax. "

“genuine religious experience is nothing but the impression of divine truth on the mind, by the energy of the Holy Spirit”.

To the simple-minded, this seems to relieve God of the responsibilty of supernatural regeneration (change of character). But this is an illusion. Alexander took an analogy which is static, and applied it to the human mind, which is changing. Alexander did the same thing Finney did with his separation of Moral Law from Physical Law, taking a philosophical abstraction, and saying it applies to reality, as illogical as saying thoughts are separate from thinking.

The immutability of a "truth impression" is saying that the soul, once illuminated, is forever changed, something emphatically stated by Witherspoon. Regeneration became nothing more than a soul that had been morally persuaded. This, of course, is like saying that blind men can see if given enough light, something contrary to Calvin's view that sinners are completely blind until God supernaturally gave them sight.

The immutability of a supernaturally changed (regenerated) nature taught by previous generations of Calvinists was transfered to the immutability of a morally persuaded rational mind. This was the rational basis of Finney's ideas of regeneration being a change of will. Finney did not get his ideas of moral persuasion being regeneration from the Hopkinisans or Bellamites, he got it from Scottish Common Sense Realism taught by George Washington Gale.

Here is John Witherspoon’s view of regeneration as merely a "truth impression" on the mind: “This conviction of the obligation of the divine law, so essentially connected with, or rather so necessarily previous to, an acceptance of the imputed righteousness of Christ, is evidently founded upon the relation of man to God, as a creature to his Creator. This relation then continues, and must continue, unchangeable; therefore the obligation founded upon it must be unalienable; and all those who have once been sensible of it, must continue to be so, unless we suppose them blinded to the knowledge of God as Creator, by the discovery of his mercy in Christ the Redeemer. But this is absurd; for the subsequent relation of a sinner to God, as forgiven and reconciled through Christ, never can take away, nay, never can alter his natural relation as a creature, nor the obligation founded upon it.”