How Phrenology Relates to the
Heresy of Decisional Regeneration 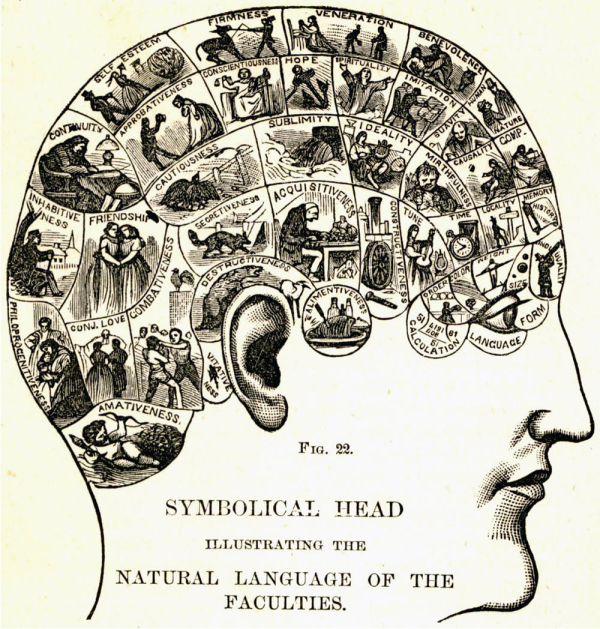 Phrenology was the ultimate alternative explanation for spiritual excitements being caused by the Holy Spirit and demons. Phrenology seemed to prove that an intellectual approach to religion could actually be seen in the physical features of the skull of the rationally superior man. Henry Ward Beecher, who turned away from orthodoxy and adopted a psuedo-scientific view of God, used phrenology as the basis for his transendental rationalizations. He said, "all my life long I have been in the habit of using phrenology as that which solves the practical phenomena of life. I regard it as far more useful, practical, and sensible than any other system of mental philosophy which has ever evolved." Phrenology was for psychology what Darwinism was for biology - the ultimate materialistic explanation for the workings of the soul of man. The shape of the skulls of famous men who advanced rationalism were seen as physical proof of superior evolutionary advancement.

He was one of the Poster Boys (along with Voltaire and Locke in The American Phrenological Journal in January 1849. 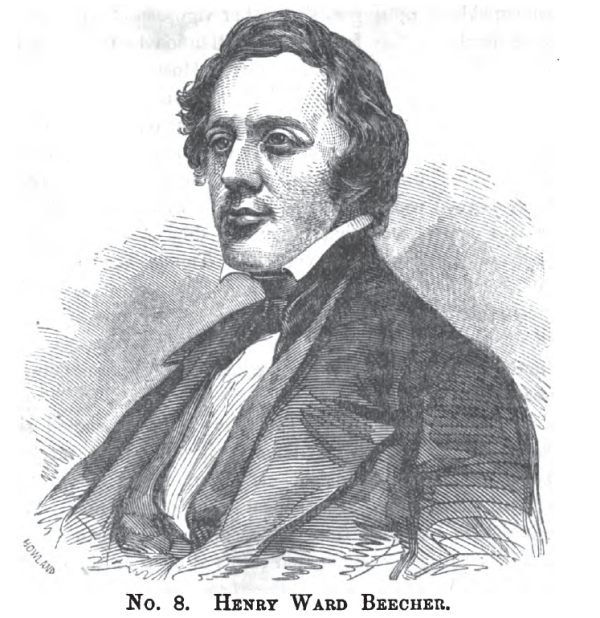 "Henry Ward Beecher, though till recently unknown out of his limited western sphere, is deservedly rising into favorable notice more rapidly than any other man in this country, consequent on the corresponding strength of these points of his character, which are mainly four. The first is the soundness and vigor of his physical constitution... The second cardinal point in his character, is the unwonted size of his Benevolence. In all my examinations of heads, I have rarely, if ever, found it surpassed, or even equaled. It towers above every other organ in his head, and is the great phrenological centre of his brain. While most heads rise higher at Firmness than at Benevolence, his rises higher at Be nevolence. It is really enormous, and forms altogether the dominant mo tive of his life...His Amativeness is fully developed, yet conjoined with his fine-grained temperament and exalted moral affections, it values woman mainly for her moral purity (this would give anyone in 1874 a laugh)...His third point of character is his force. This is consequent on his large Combativeness and Firmness, and his enthusiastic temperament. What he does, he does with all his might....His Firmness is extraordinary, but, acting under his higher faculties... Self-Esteem is quite small, and constitutes one of the greatest defects of his character (no doubt, psychologists would say this was the source of his infidelity)...The fourth point in his character is his intellectuality, and this is quite remarkable. His forehead is high, broad, and expansive, yet its predominant organ is Comparison. Causality and Mirthfulness are large, and add greatly to his intellectual capabilities. But Comparison is the master element of his mind...All things considered, taking his organic condition as the basis of our prophecy, we confidently predict, that in ten years he will stand out as the strong man of the age, and for a quarter of a century he will be the master spirit of his day and generation."

This prophesy was fulfilled - God allowed Henry Ward Beecher to be raised up the most famous minister of nominal Christianity in America after the Civil War. In what would be called today "New Age" or "Spiritualist" publications, Henry Ward Beecher would be held high as the Ascendent Master - Satan was building his church.

In 1849, The Phrenological Journal saw in Beecher an heir to John Locke in shaping Protestant theology.

Till lately, Western mind and character have made but little impression upon Eastern; yet their silent but resistless power is beginning to tell on our theology,
our style of preaching, our views of things, and modes of life and business; and in ten years will shape them after its own large and noble pattern. Take Henry Ward Beeoher as an individual example. If he had settled East, he, too, would have been in the peck-measure, seminary routine of Eastern religionism. But he went West. They soon pulled off his strait-jacket for him, though it was never on very tight, and his large soul and clear mind went forth, free as air, into the vast prairies of universal truth, where
they grew to their present beautiful proportions and gigantic dimensions.

His sermons, preached from the same texts with those of his father, are as different as a stinted, bark-bound, shrub-oak, is from the mighty but wellproportioned mammoth trees of the western forest ; and we opine that old Lyman Beecher would not preach just such sermons now as he did "long ago" in the "Old South." Yet he may be too old to take on a new growth, even though planted in rich western soil. Young Beecher, thus progressed by Westernism, came East. The divines here tried to put on their seminary and catechetical strait-jacket, but it was some fifty times too small for him. He could not begin to wear it, and told them flatly, that, besides being too small for a Liliputian, whereas he was a man, it was neither woven nor made right, was badly colored in the start, and these colors all faded ; that his western frock-coat suited him well enough, and, with their leave, or without it, he should preach in it any how. Thereupon, Dr. Cox, once so far in advance of the main body of the Presbyterian army as to endanger his excommunication, shut his pulpit doors against him—though Beecher don't probably care much about preaching in so small a place. Like causes are producing like effects in the scientific world, the business world, and the entire world of republican mind. The East gave birth to the West, and now the West in return is giving a " new birth" to the East.

The waves of its progressive and progressing spirit are perpetually rolling back upon us, and this surging and resurging will go on for ages to roll to and fro till they wash away all that remains of illiberalism (orthodoxy), and put man kind upon that pinnacle of greatness and goodness he was originally created to occupy. But the West is not beyond the subsequent reach of this same emigrato-progressive (social evolution) law. Her happy turn is in store, to be brought forth gradually as time rolls on. Nor will this inimitably beautiful provision cease to press mankind, and ALL mankind, onward and upward till the earth is filled full of blessed occupants on the one hand, and human perfection and happiness upon the other.