How David Hume
Relates to the
Heresy of Decisional Regeneration 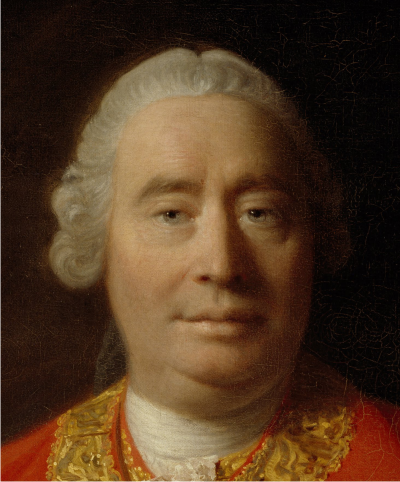 David Hume (1711–1776)  moved empiricism to a whole new level of skepticism above that of John Locke. Hume argued in keeping with the empiricist view that all knowledge derives from sense experience, but he accepted that this has implications not normally acceptable to philosophers.

Beginning with his A Treatise of Human Nature (1739), Hume strove to create a total naturalistic science of man that examined the psychological basis of human nature. Against rationalists, Hume held that passion rather than reason governs human behavior. He argued against the existence of innate ideas, postulating that humans can have knowledge only of the objects of experience, and the relations of ideas, calling the rest "nothing but sophistry and illusion", a dichotomy later given the name Hume's fork. This was the begining of "Logical Positivism", the view that anything that can not be proven empirically is potentially false.

Hume's fork is often stated in such a way that statements are divided up into two types:

The first type is axiomatic statements such as "2 + 2 = 4", "all bachelors are unmarried", and truths of mathematics and logic.

The second type is unprovable statements such as "the sun will rise in the morning", "the Earth has precisely one moon", and "water will freeze at 32 degrees Fahrenheit". These ideas are unprovable because certainty does not exist in science and it is impossible to prove something about the world with certainty.

Hume claims that our belief in cause-and-effect relationships between events is not grounded on reason, but rather arises merely by habit or custom."the sun will rise in the morning" is not provable because it isn't something that we can know based on past experience—all past experience could tell us is that in the past, the future has resembled the past.

How is this related to the heresy of Decisional Regeneration? The beginning of the evolutionary chain that ended in 1914 with Billy Sunday calling everyone who came forward in an altar call a "convert" started with the Scottish Common Sense Realism of Thomas Reid, who designed a theological system to refute Hume's Fork.

Hume's Fork asserts that it is pointless to try to prove the existence of God. If God is not literally made up of physical matter, and does not have an observable effect on the world, making a statement about God is not a matter of fact. Therefore, a statement about God must be a relation of ideas. In that case, if we prove the statement "God exists," since it doesn't really tell us anything about the world; it is just playing with words. It is easy to see how Hume's fork voids the causal argument and the ontological argument for the existence of a non-observable God. However, this does not mean that the validity of Hume's fork would imply that God definitely does not exist, only that it would imply that the existence of God cannot be proven as a matter of fact without worldly evidence.

Hume wrote in An Enquiry Concerning Human Understanding, "If we take in our hand any volume; of divinity or school metaphysics, for instance; let us ask, Does it contain any abstract reasoning concerning quantity or number? No. Does it contain any experimental reasoning concerning matter of fact and existence? No. Commit it then to the flames: for it can contain nothing but sophistry and illusion."