How Harriet Beecher Stowe
Relates to the
Heresy of Decisional Regeneration 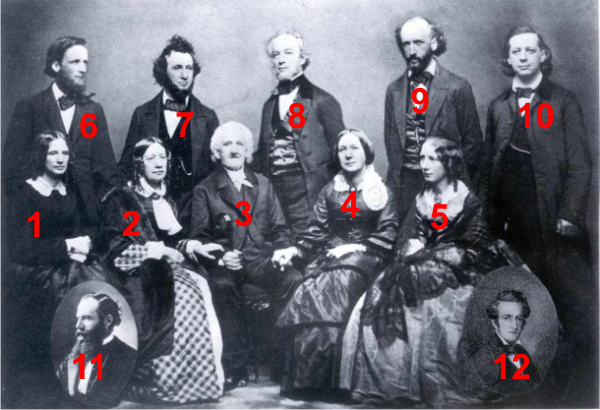 Dr. Leonard Bacon said in 1863, "This country is inhabited by saints, sinners and Beechers." When this photo was taken by Mathew Brady just before the Civil War, Lyman Beecher (3) had been the most influential Congregationalist minister in the east. Henry Ward Beecher (10) was a Congregationalist minister that would soon be auctioning off a female slave in his Brooklyn, N.Y. church to highlight the evils of slavery. His "Beecher's Bibles" (Sharps rifles) would soon be delivered to abolitionists in "bloody Kansas". A product of his age, Henry Ward epitomized the "man is the center of all things" spirit of the age that caused New Light Calvinism to spend it's energy in many "freedom of man" causes. After the Civil War, Henry Ward would be kicked out of his Congregationalist association for heresy, but was so popular that he remained the pastor of his mega-church even while he was tried for adultery in the most notorious show trial of the age. Henry Ward renounced Calvinism in favor of a pseudo-scientific, transcendentalist god, becoming the most famous so-called Christian minister of post Civil War America. Harriet Beecher Stowe (5) was famous for Uncle Tom's Cabin. Thomas Beecher (6) was a Congregationalist minister. William Beecher (7) was a minister that believed in phrenology, abolitionism, temperance and spiritualism. Edward Beecher (8) was a Congregationalist minister that worked to end slavery. The letters of Lyman to Edward as a child, begging him to "make himself a new heart" are here. Charles Beecher (9) was a Presbyterian minister whose experiences down south provided sister Harriet material for Uncle Tom's Cabin. Like his brother William, he believed in Spiritualism. Isabella Beecher (1) was a women's rights and suffrage activist. She wrote, "every woman has the rights as a human being first. which belong to no sex, and ought to be a freely conceded to her as if she were a man". Catherine Beecher (2) started and promoted women's colleges her entire life. Mary Beecher (4) was only Beecher daughter that refrained from humanitarian causes. George Chaplin Beecher (11) lived perhaps the most varied life, serving as a sailor, a missionary, a Congregationalist minister and an educator. George served as a inspiration for the sailor in Harriet Beecher Stowe's romance novel, The Minister's Wooing, excerpts of which are shown below with comments on Hopkins theology. George Beecher (12) was a minister, an abolitionist and an educator.

Freudian psychologists could make a case for the crucible of Calvinist theology refining most of the Beechers into useful workers for God according to their own lights.

Milton Rugoff claims (and I agree with him) that in "two generations the Beechers emerged, along with many other Americans, from a God-centered, theology-ridden world concerned with the fate of man's eternal soul into a man-centered society occupied mainly with life on earth." In other words. the Beechers exemplify more than any other family, the transition from Hopkinsian New Light Calvinism to the mixed-up stew of ideas that became popular religion in the Gilded Age.

Harriet Beecher married Calvin Ellis Stowe, a widower and professor at Lane Theological seminary in 1836.The Stowes supported the Underground Railroad, temporarily housing several fugitive slaves in their home.  In 1850, Congress passed the Fugitive Slave Law, prohibiting assistance to fugitives. She wrote to the weekly antislavery journal National Era, that she planned to write a story about the problem of slavery: “I feel now that the time is come when even a woman or a child who can speak a word for freedom and humanity is bound to speak… I hope every woman who can write will not be silent.” She published Uncle Tom's Cabin in National Era as a 40 week serial sarting in 1851.

Uncle Tom's Cabin represents the spirit of the age that captured the attention of northern New Light Calvinists ... the belief that time was short before the coming of Christ and that God's Spirit was inspiring America to free the slaves. This idea was one aspect of northern post-millennialism. Protestants thought they were fulfillment end-time prophesy...the idea that real faith must be active in promoting the principles of a loving God to an ignorant, backward, uneducated people. The Beecher's sacrificed many things to give their children the finest education. Their Calvinism was activist Calvinism. That is why most of their children were active abolitionists, also promoting temperance and women's rights. This was the heritage of activist New Light Calvinist theologian Samuel Hopkins, as you will find in the excerpts from Harriet Beecher Stowe's, The Minister's Wooing below.